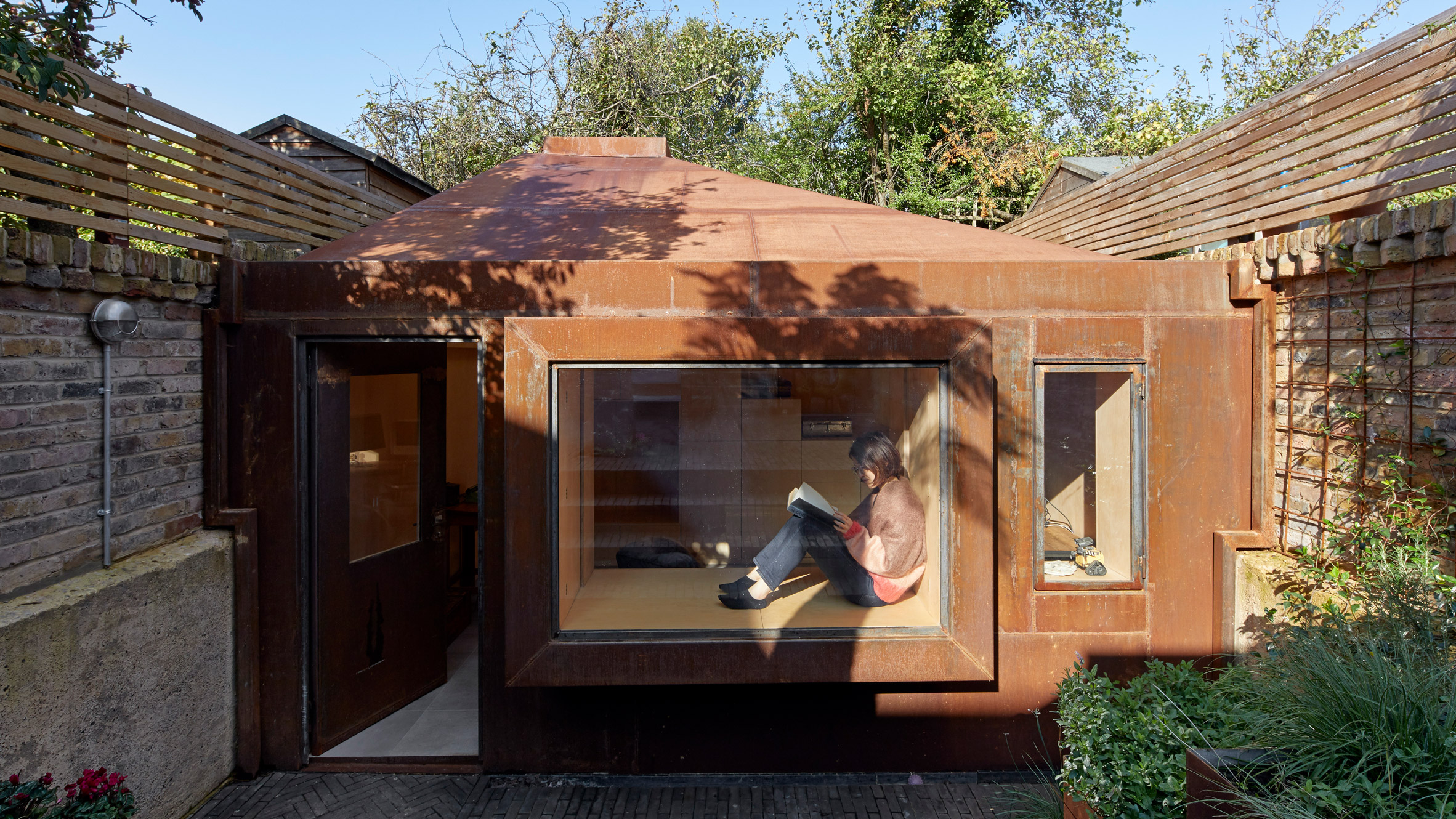 Rise Design Studio has sunk a weathered steel-clad extension in the garden of a London house as a sanctuary from the UK’s Brexit-dominated political climate.

Dubbed the Brexit Bunker, the small studio provides a place to work or relax.

Hot-rolled steel, the same material used in the construction of the railway track directly behind the site, was left to naturally rust and then used to cover the entire exterior of the garden room.

Featuring a pyramidal roof with an oriel window, it faces the main house from the other end of a paved garden and is sandwiched between two brick walls.

“The garden studio sits, or rather nests, at the rear of a small garden connected by a patio clad in clay pavers, a contemporary addition that is still reminiscent of the reclaimed bricks used for the garden walls,” said the studio.

Steps leads down from this patio to the Brexit Bunker’s door next to a projecting window box providing seating overlooking the garden.

At  the back, where it faces the railway tracks, the only views are upwards through the skylight.

Plywood provides a surprising contrast to the rough exterior, lining the walls and ceiling to create a warm and light-filled space.

Built-in storage has been arranged to provide a niche for seating below.

A set of steps lead over the niche and up to create an accessible platform area directly beneath the skylight.

“One can relax surrounded by the sounds of birds without any visual hint that they are in the city instead of the country; it is a place of sanctuary,” said the studio.

The walls and roof of the studio have been highly insulated to offer both thermal and acoustic protection.

A hanging light fixture also made from weathered steel illuminates the patio.

Its shape is designed to emulate the pyramid-shape of the Brexit Bunker, connecting the house and the studio.

Rise Design Studio, based in Queens Park in London, was founded in 2011 by Sean Ronnie Hill.

Previous projects by the firm include a glazed, light-filled extension to a terrace home, as well as the renovation of a flat inside a 19th century mansion block.

Photography is by Edmund Sumner.