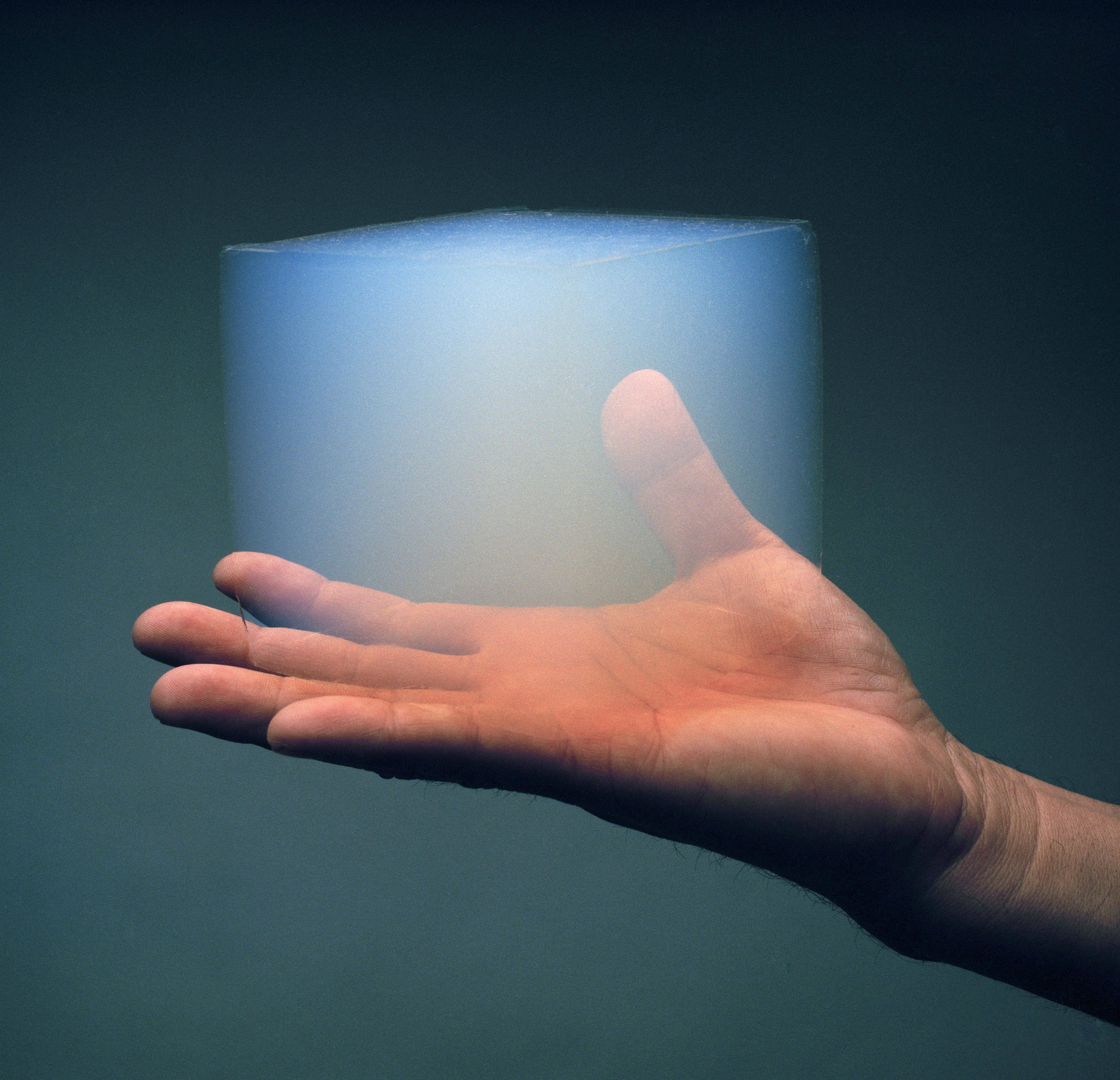 We may be able to survive and live on Mars in regions protected by thin ceilings of silica aerogel, a strong lightweight material that insulates heat and blocks harmful ultraviolet radiation while weighing almost nothing.

Researchers at Harvard University in the US, NASA, and the University of Edinburgh in Scotland envision areas of Mars enclosed by two to three-centimetre-thick walls of silica aerogel. The strange material is ghost-like in appearance, and although it’s up to 99.98 per cent air, it’s actually a solid.

Aerogels come in various shapes and forms with their own mix of properties. Typically, they are made from sucking out the liquid in a gel using something called a supercritical dryer device. The resulting aerogel consists of pockets of air, and is therefore ultralight and can be capable of trapping heat. It can also be made hydrophobic or semi-porous as needed.

The semitransparent solid, therefore, has odd properties that may just help humans colonize the Red Planet. The solid silica can be manufactured to block out, say, dangerous UV rays while allowing visible light through.

However, it’s the trapping of heat that is most interesting here. When the boffins shone a lamp onto a thin block of silica aerogel, measuring less than 3cm thick, they found that the surface beneath the material warmed up to 65 degrees Celsius (that’s 150 degrees Fahrenheit for you Americans), high enough, of course, to melt ice into water. The results were published in Nature Astronomy on Monday.

Welcome to the Hotel Aerogel

The academics reckon if a region of ice near the higher latitudes of Mars was covered with a layer of aerogel, then the frosty ground would melt to produce liquid water as the environment heats up. It’d also be warm enough for humans to live and farm food in order to survive in the otherwise harsh, acrid conditions elsewhere the planet.

“The ideal place for a Martian outpost would have plentiful water and moderate temperatures,” said Laura Kerber, co-author of the paper and a geologist at NASA’s Jet Propulsion Laboratory. “Mars is warmer around the equator, but most of the water ice is located at higher latitudes. Building with silica aerogel would allow us to artificially create warm environments where there is already water ice available.”

The researchers hope to test their idea by conducting more silica aerogel experiments in the Atacama Desert in Chile or McMurdo Dry Valleys in Antarctica. Both environments have subzero-Celsius temperatures and are as unforgiving as Mars.

“Unlike the previous ideas to make Mars habitable, this is something that can be developed and tested systematically with materials and technology we already have,” said Robin Wordsworth, first author of the paper and an assistant professor of environmental Science and engineering at Harvard University.

But there are obviously other challenges to making Mars habitable. The atmospheric pressure there is lower than Earth’s, and the undersides of aerogel walls will need to be pressurized to prevent water vapor seeping out. The dusty nature of the planet might also cut the amount of light that could penetrate such a shelter.

Also, there’s the problem of how to ship large quantities of the material to build settlements – aerogel is insanely light but also very bulky. Oh, and another thing: there’s also very little oxygen on Mars so we’ll have to work out how we can even breathe let alone water crops, unless we can crack Martian water into hydrogen and oxygen safely. ®

PS: Interestingly enough, it is believed a classified type of aerogel codenamed FOGBANK is used in American thermonuclear warheads as a filler between the fission primary and the fusion-stage secondary. The material is so hush-hush, the US military accidentally forgot how to make it at one point.